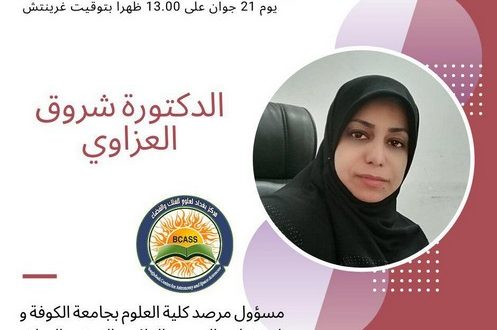 Dr. Shorouq Mahdi Al-Azzawi, an instructor at the Faculty of Science at the University of Kufa, participated in the virtual introductory conference on astronomy and space sciences in Tunisia with the participation of researchers from Iraq and the host country and a number of Arab countries.
The conference aims to shed light on the active scientific groups in astronomy and space sciences, and to benefit from successful experiences and experiences in building bridges of communication and scientific cooperation between the Arab countries and encourage youth energies on scientific research and positive and constructive development

Dr. Shorouq Al-Azzawi presented astronomical observatories in Najaf represented by the Observatory of the Faclty of Sciences at the University of Kufa and the astronomical observatory of the upper holy threshold, and her most important scientific activities such as observing the family, especially in religious events in the month of Ramadan and the month of Dhul-Hijjah, and preparing schedules for Islamic times of prayer.

Dr. Al-Azzawi concluded her presentation by presenting important future projects to develop space science and astronomy in Iraq in general and in Najaf in particular, such as the educational astronomical dome and the astronomical museum 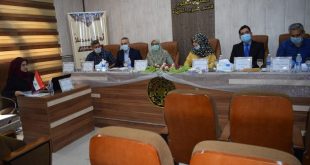