SUMMARY. The intracytoplasmic sperm injection ICSI is a
procedure now commonly used to overcome male infertility troubles,
although it may also be used when oocytes cannot easily be
interpenetrate by sperm, sex selection, and occasionally as well as to
sperm donation. It can be used in abnormal semen parameters
because by using microscope can select normal morphology sperm
allowing for good success rate for embryo development. Generally
ICSI is performed better than an in vitro fertilization procedure by
collecting several or at least one oocytes from a female and inject
them under microscope and follow the injected oocytes in 2nd and
3rd days of injection for fertilization embryo, cleavage and blast cyst
formation. The aim of this study is to compare the ICSI outcomes
and to evaluate the levels of hydrogen peroxide and glutathione in
seminal plasma between male factor and unexplained infertile
patients. A prospective study was performed in fertility center at AL-
Sader hospital in Al-Najaf governorate involving 79 couples
participates in this study between January 2016 and March 2017.The
present study demonstrates that infertile patient so female factors
have significant difference in GSH and H2O2 levels with unexplained
infertile group. Male factor group reveal significant decrease in
cleavage rate, and also decrease in fertilization rate, grade I embryo
and pregnancy rate, but not significant statistically. Semen samples
of male factor group show high levels of H2O2 and low levels of GSH
that correlate with a significant affection of sperm parameters
(concentration, motility, morphology. Present study concluded that
abnormal high H2O2 and abnormal low GSH levels of seminal
plasma are important factors affecting sperm parameters and ICSI
outcomes. 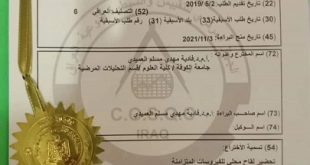