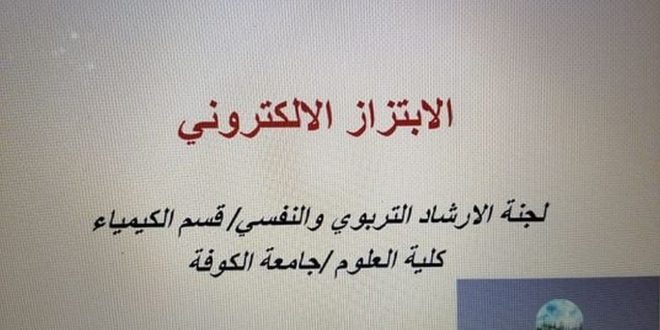 The Department of Chemistry at the Faculty of Science at the University of Kufa held the first virtual seminar on the phenomenon of electronic extortion and its risks.

The symposium aimed to introduce the phenomenon of electronic blackmail, its causes, methods of extortion, its social and psychological effects, how to avoid it, and the role of social institutions in curbing this dangerous phenomenon.

The topics of the symposium included lectures by Dr. Hana Kazem Kazar, Dr. Manal Farhan Al-Khaqani and Assistant Professor Hawra Mahdi Farhan, on introducing electronic extortion, the groups targeted by the blackmailer, the goals he seeks to obtain as a result of the extortion process, and the need to inform the relevant authorities such as the community police and others if it occurs.

The symposium recommended several recommendations to avoid electronic blackmail, the most important of which is to follow the instructions issued by the approved electronic networks in confirming websites’ accounts, not publishing or sending important data, information, pictures or videos on social networking sites, and the need to avoid entering suspicious sites on social networking sites and not to send electronic devices to mechanical engineers (maintenance workshops), unless the person working in the device is trusted and known for his integrity and good reputation.